Ashlar appreciates the story of Fleming and how  it began. In the early 1940s, Canadian-born T. Harry Fleming emigrated to the United States after graduating from college. He landed in St. Louis, Missouri where he began working in the concrete industry. He learned the trade quickly and, full of innovative ideas for improvement, founded the Concrete Transport Mixer Co. in 1943, where he began manufacturing the renowned “Rocket Mixer” ready-mix concrete units for trucks.

By 1946, Harry was ready to broaden the scope of his operations, and so he founded Fleming Manufacturing Co. The firm’s initial product was the Fleming-100, a small, hand-operated, turn-over machine. This was the first of many ingenious technological solutions Fleming would pioneer.

When the post World War II construction boom resulted in a burgeoning demand for concrete building blocks, Fleming headquarters moved to Cuba, Missouri, in 1951, to increase plant size and capacity. Here Fleming made strides to forever change the way we manufacture concrete block and pavers. In the late 1960s, Harry’s son Merle took the helm of the business and, once again, demonstrated the firm’s responsiveness to changing market demand. Under Merle’s leadership, Fleming became the world’s foremost concrete specialists developing and manufacturing state-of-the-art equipment for the production of all types of construction, landscape, and specialty components.

In the mid 1980s, the management reins went to the family’s third generation, William M. Fleming. His visionary direction led Fleming beyond the United States to Canada, Mexico, Central and South America, the Caribbean, Europe, Africa, the Middle East, Asia, and the Pacific Rim. In late 2000, Fleming was acquired by Eagle Building Technologies. Their outreach in the international markets assisted Fleming in surpassing previous foreign market sales by two fold.

By 2005, the company merged with Reid and became Reid-Fleming Industrial. Reid-Fleming continued to manufacture and sell Fleming’s original equipment.

And in 2017, Ashlar Machinery purchased Reid-Fleming. Ashlar now owns all of Fleming’s proprietary data, patents, engineering specifications and research, and continues to serve the industry with decades of experience as Ashlar Machinery. 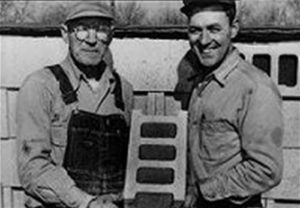 First to introduce making manhole rings on a casting machine, and introduced largest pallet machine in the USA (24″ X 48″)

Developed the industry’s first pallet de-stacker
Developed the largest output brick machine made in the USA (16,000 per hour)

Ashlar Machinery purchases Reid-Fleming and all assets, data, and patents

A Legacy to Build Upon

Ashlar Machinery is honored to carry T. Harry Fleming’s torch. Ashlar’s mission is to provide innovative solutions with the best customer service. To see what services Ashlar Machinery offers, take a look at the Services page.